As an author, teacher, researcher, and inventor, Dr. Larry Webster had a purpose much bigger than himself. His message was simple: all children deserve chiropractic care. He wanted to provide an association where he could continue to advocate for chiropractic care of children and in pregnancy. It was important to him to share with other chiropractors what he knew and how he practiced.

1986: The Chiropractic Organization for Children 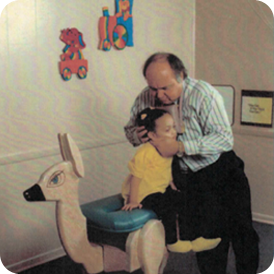 Dr. Webster became an active spokesman for chiropractic for children and in pregnancy, teaching seminars and conducting research across the nation and around the world. The ICPA was leading the field of pediatric chiropractic, as the first chiropractic organization to provide newsletters to members, to hold an annual conference and to host a 100-hour, certification program.

With his passing in 1997, Connie Webster, Dr. Webster's wife brought her husband's dream into full existence. The ICPA became incorporated as a 501c3 nonprofit organization and the first board of directors was formed. In 2000, Dr. Ohm created the Webster Technique Certification which became part of the ICPA Certification.

In 2002, the ICPA moved to Pennsylvania and Dr. Jeanne Ohm became the new Executive Director. The ICPA had approximately 500 contributing members and was holding 10-20 seminars each year. Expanding Dr. Webster's vision, 2002 marked the beginnings of the ICPA's full-time research arm for pediatric chiropractic care, adding Dr. Joel Alcantara as Research Director. In that same year, the 360-hour Diplomate Program launched, and ICPA seminars in Europe were officially underway.

The ICPA began to advertise nationally on behalf of our members to the public in magazines in the US such as Mothering, Fit Pregnancy, Midwifery Today and Lamaze. They also advertised in AU and UK parenting magazines. The ICPA guided the public to chiropractic and to our members in the newly launched Find a Chiropractor directory.

By 2003, the organization had grown to 1000 members, the Certification Program expanded to many cities throughout North America and Europe and the bi-monthly newsletter reached 24 pages.

Seeking to expand public exposure to the ICPA doctors, Dr. Ohm transformed the member newsletter into a quarterly, full-color magazine: Pathways to Family Wellness. In Pathways, we shared articles, resources, and suggestions for parents seeking to incorporate the chiropractic family lifestyle in addition to their regular chiropractic care. Soon after it was possible for patients, other like-minded practitioners, and parents to subscribe.

The ICPA Diplomate Program refined its syllabus to meet the practical needs of the attending doctors. It was instrumental in forming the Academy of Chiropractic Family Practice, the first apolitical body overseeing certification and diplomate programs. The ICPA formed the Academy Council of Chiropractic Pediatrics and in 2006, the ICPA graduated the first Diplomate class, co-endorsed by the Academy.

Initiated from the support of ICPA members, the Practice-Based Research Network (PBRN) was established by Dr. Joel Alcantara to address effectiveness and safety concerns in pediatric chiropractic. ICPA members began collecting data from their practices to contribute to a growing body of evidence. In 2009, findings from this PBRN were published in Explore: The Journal of Science and Healing.

With its ongoing studies, the ICPA PBRN continues to address issues relevant to the chiropractic care of children, pregnant women and family care from the salutogenic model.

Realizing the importance of building local, community tribes, the ICPA engaged our members to create Pathways Connect Gathering Groups in their practices. The Pathways Connect program was established to offer parents a safe and comfortable environment to discuss the issues that they faced. ICPA offered a directory to help parents find groups at a local practitioner's office. In 2010, ICPA brought the Pathways Connect program to chiropractic colleges as student clubs. Using Pathways as the primary resource, these groups invited new community members into chiropractic offices and offered patients a place to continue their education of chiropractic and other wellness topics they cared about.

Today, ICPA is the profession's oldest, largest and most sought out chiropractic pediatric association in the world. With 6,000 members supporting our collective mission, and their commitment to caring for more families in their communities, we are truly advancing and establishing the course of chiropractic and the lives of children.

This site uses cookies and other tracking technologies to assist with navigation and user experiences. See our Privacy Policy to get more information on how your data is used.